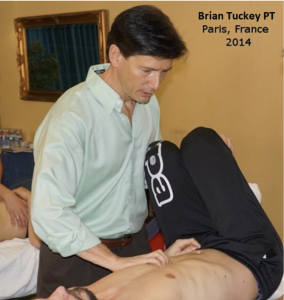 Mr. Tuckey, a physical therapist with 28 years of diverse experience in manipulative therapies, is one of only 4 physical therapists in the world ever to be certified by Lawrence Jones D.O to teach Strain and Counterstrain Technique (SCS).
For more information regarding the history, application or indications of SCS or “Classic Counterstrain” click here  (Wong Strain Counterstrain Current Concepts Article)

Strain and Counterstrain Technique (SCS)
Practitioners or patients familiar with Fascial Counterstrain (FCS) should view FCS as the natural progression and expansion of Dr. Jones’s original, groundbreaking work.  FCS changes SCS from a regional tender point model to an anatomically, system specific model that markedly expands the specificity, scope and power of the technique.  In practical terms, FCS allows practitioners to identify and correct dysfunction in all regions and systems of the body, not just the musculoskeletal system.  In regards to actual numbers, FCS expands the number of Fascial Counterstrain treatments from 200 to over 850 individual techniques.

FCS removes painful, reflexive tissue contractions from the body via a gentle hands-on process that involves slackening or decompression of the involved structures.  The treatments are completely painless making it a viable option for even the most painful or delicate cases.  FCS’s powerful, multi-system effects are believed to be due to the deactivation of deep fascial pain receptors (nociceptors) which maintain the body’s soft tissues in a persistent guarded or “over-protective” state.  During FCS treatments, there is a palpable, often visible reduction in localized tissue edema.  This combination of metabolite drainage and proprioceptive re-setting gives Fascial Counterstrain unparalleled carry over.  Many patients report lasting relief of chronic conditions after only one or two treatment sessions. 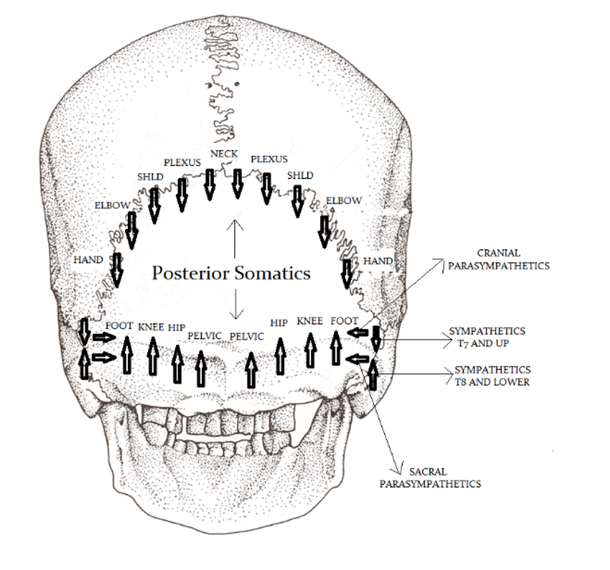 In addition to vastly improving the specificity, scope and number of techniques as compared to classic Strain and Counterstrain, FCS adds a remarkably powerful diagnostic tool called the “FCS Cranial Scan.” This cranial motion test, developed by Tuckey over the last 15 years, allows practitioners to rapidly identify any dysfunctional systems and regions in the body in under 60 seconds.  For example, motion testing of the occipitomastoid suture will quickly allow the practitioner to identify any existing dysfunction of the autonomic nervous system (see diagram)

FCS embraces the concepts of holistic and osteopathic medicine in that it addresses the body as a whole.  By normalizing blood flow, muscular tension, vascular drainage, and neural input, FCS maximizes the body’s intrinsic healing capacity.  Multi-system diagnosis and manipulation is the key to correcting chronic and acute conditions of all types.  This treatment model allows the identification and correction of the source of a patient’s pain and disability, not just the surface symptoms.

FCS is currently being taught to a rapidly expanding audience of medical practitioners both domestically and internationally through various continuing education partners including the Jones Institute (www.jiscs.com) and the Counterstrain Academy (www.counterstrainacademy.com)

“Fascial Counterstrain is a modern, expanded version of the osteopathic technique Strain and Counterstrain in which all systems of the human body are assessed and treated, not just the musculoskeletal system. A new explanation of fascial/neuromuscular tender points is presented that utilizes the modern concepts of central processing and the emerging science of fascia as a contractile sensory organ. We suggest that the body protects all tissues, not just musculoskeletal structures, via nocifensive reflexes orchestrated by the fascial system.”