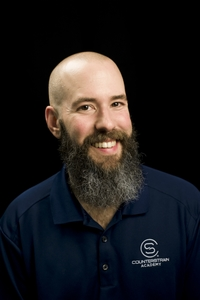 Chris graduated with a Master’s Degree in Physical Therapy (MSPT) from New York Institute of Technology in 2000 and has been an avid learner of the healing arts ever since. From Chris’s first exposure to Counterstrain, in 2006, he was immediately drawn to its gentle nature and power of the technique and set himself on the path to become certified. He earned his board level certification in 2012 from the Jones Institute and began his training with CSA Mastery Program in January 2014, completing the Mastery Program in November 2014. Chris taught his first course as a lead instructor for the Counterstrain Academy – Mastery Program in the fall of 2015. Since then, he has taught more than 10 CSA mastery courses including Visceral, Lymphatic/Venous, Arterial, and Nervous System Part 1.