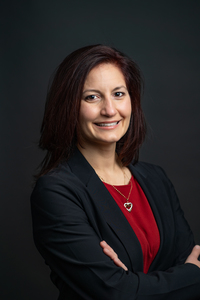 Dr. Riley has been providing outpatient services for orthopedics, post-operative care, and sports injuries at RWJBarnabas Health full-time since 2012. She graduated from Seton Hall University in 2005 with dual degrees as a Doctor of Physical Therapy and with her Master's of Science in Athletic Training. Dr. Riley’s earlier positions included being a clinical consultant on the Brain Injury Continuum at JFK Hospital, Edison, NJ (2005-2012) and Athletic Trainer for the New Jersey Hitmen Junior Team (2006-2009) as well as the New Jersey Devils Youth Hockey Club (2009-2010). Always a strong advocate for Physical Therapy, Doula supports her professional organization APTA, having served as State Director of Practice, a Delegate in the House of Delegates and Federal Affairs Liaison for N.J. Doula was honored in 2010 with the American Physical Therapy Association's Emerging Leader Award. Doula discovered the benefits of Fascial Counterstrain in 2016 after her own back injury. It was at this time that she began courses through the Jones Institute and then the Counterstrain Academy. She continues to develop her skills and knowledge base in this area of manual therapy today. Doula and her husband Steve are raising their 2 daughters and rescued dog, Ricky. Doula has finished 4 marathons since 2011 and her first triathlon (Spring distance) in July of 2021!